Retired South Africa great AB de Villiers Friday broke his silence on the controversy surrounding his international comeback that never happened, saying he did not demand an 11th-hour return before the World Cup.

In a detailed statement, De Villiers gave his side of the story after he was criticised for picking and choosing international assignments after announcing his retirement last year.

“I made absolutely no demands at all. I certainly did not try to force my way into the World Cup squad on the eve of the tournament and did not expect to be included. There was no burning issue from my side, and no sense of injustice,” said one of the modern greats who played 114 Tests and 228 ODIs.

Here’s what Kohli had to say,”My brother you are the most honest and committed man I know. It’s been unfortunate to see this happen to you. But know that we stand with you and believe in you. Seeing people enter your personal space has been sad to see and uncalled for. More love and power

to you and your beautiful family. Me and anushka are Always here for you guys”. 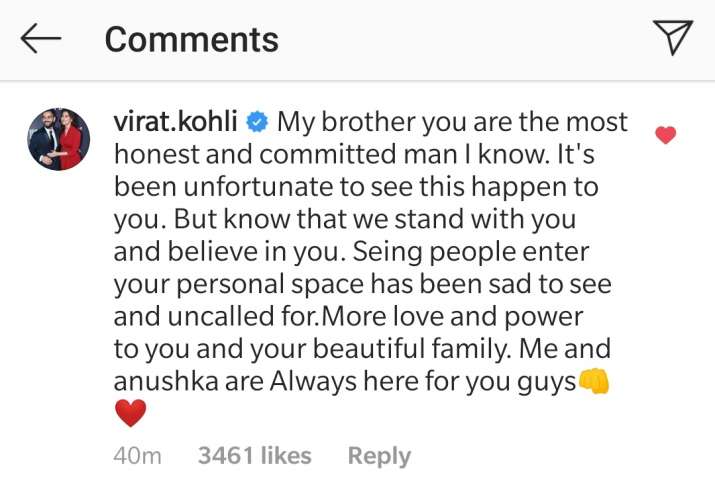 Yuvraj Singh said that it was South Africa’s loss to not have him and motivated De Villiers with some inspiring words.

My dear friend and legend, your one of the nicest guys I’ve ever played cricket with an absolute gem of a person! There was never a chance for s a in this World Cup to win without you! It is your country’s loss no to have you in the squad, not yours. The bigger the player more the criticism! We all know
what a gentleman you are #respect 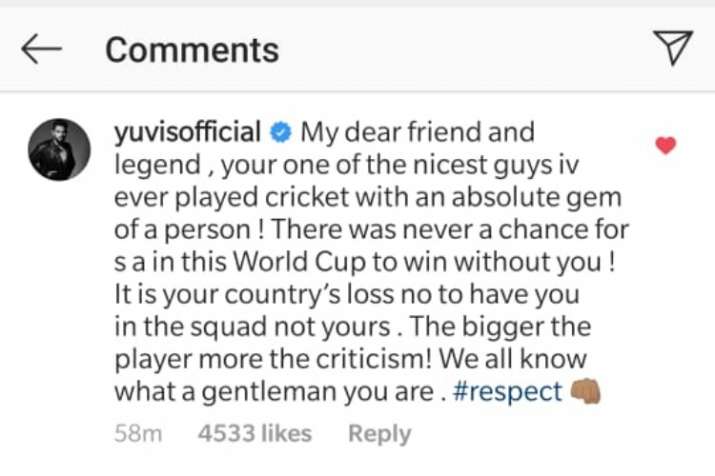 De Villiers maintained the he retired for the right reasons as he wanted to spend more time with his family.

“I retired for honest reasons and, when asked if I could be available for the World Cup, agreed to keep the door open. In the event, understandably, the team moved on. No problem. I am not angry with anybody.

“Some have insisted I was motivated purely by money. They are wrong. In truth, I have turned down many lucrative offers to play around the world, and have cut the time spent away from home each year from eight months to just over three months.”